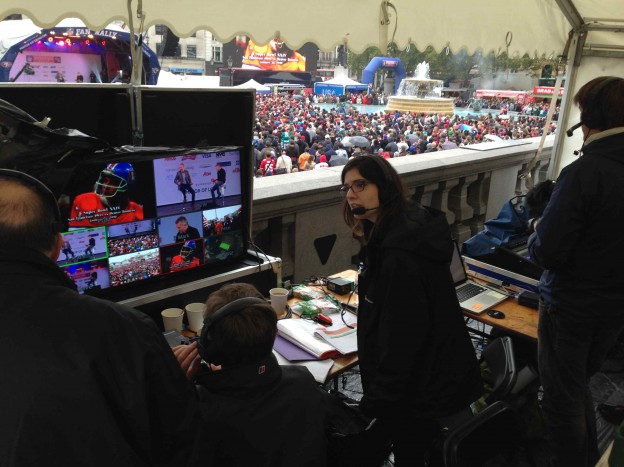 An Outside Broadcast (OB) truck was first used for King George VI’s coronation in May 1937, watched by around 10,000 people at home on the BBC’s television service.

Since then, broadcast has changed massively – analogue has been killed off by digital, HD has surpassed SD, and new technologies are set to change things in the next few years even more. Broadcast giant Sony helped pioneer the first 3D OB truck a couple of years ago and built a 4K multi-camera OB truck in 2013. NHK even trialled a modified 8K OB truck during the London Olympics 2012.

So, how has the advance of technology changed the OB market? Well, for one thing, equipment is smaller. Instead of a cumbersome rack of VTR decks, space-saving file-based servers are now the norm. The advent of multi-viewers has changed OB trucks, too – no longer do you need a wall of chunky CRT monitors when large flat screen monitors will do the job instead. Fibre cabling has also increased capabilities. Fibre means longer distances and fewer cables required. At Trickbox TV, we use the most compact kit possible. Not only is this great for our clients, it means our kit rooms and trucks have also shrunk!

The cost of kitting out an OB truck or studio facility has plummeted. A few years ago, for a simple multi-camera set-up, you’d need a vision mixer, a separate multi-viewer, a video server to play the show’s opening title in on, some up-converters for that last-minute SD feed, a video scaler for that PC feed you need to get into the mixer etc. But now, one unit – a vision mixer for under £10K – can do all that! The cost of equipment has reduced considerably, in part due to a fierce market, but largely because the cost of producing components has reduced. CMOS sensors over CCD sensors is an obvious case. The introduction of KA band and 3G and 4G video uplink means it’s easier and cheaper to transmit. Will this mean more outside broadcast? We certainly hope so.

There are some staples of television which OB will continue to dominate, such as sport and large-scale national events. But other traditional OB territory, such as music, events and festivals, can now be achieved on a smaller scale. You can get the same functionality as an OB truck with a portable production unit (PPU) but with a smaller footprint and lower budget. Trickbox TV often get asked to quote for music jobs and big events because, sometimes, an OB truck just isn’t cost effective or there are space limitations. Plus, we work with some smaller broadcast production companies to help provide bespoke solutions for pilots or low-budget productions.

So what other emerging technologies are likely to change the face of OB? IP broadcast technology is sure to grow. BBC R&D has developed Stagebox – a camera adaptor designed to transmit everything you’d expect in a conventional triax or fibre cable (video, talkback, tally lights etc), but it’s all done over a single cat5E cable. The video is encoded at industry standard AVC-Intra 100 compression in real time. With the right software at the other end, you could ISO record all your cameras onto one storage device.

IP control is another technology changing how things are done in the field. Sony has brought out a software application which allows you to rack multiple cameras over IP. Every vision engineer must be thinking: “Do I actually need to get out of bed for this job? I could rack that show from home!”

As IP technologies get stronger, will it get to a point where there’s just a skeleton crew out in the field, but everything’s controlled from another location? Well, since technology is getting better, passion from people in the industry is strong and the demand is high from viewers, it’s clear the future of OB is going to get better and better.

If you’d like to find out how Trickbox TV can help with your next outside broadcast, contact us today.

One thought on “The future is bright for Outside Broadcast”